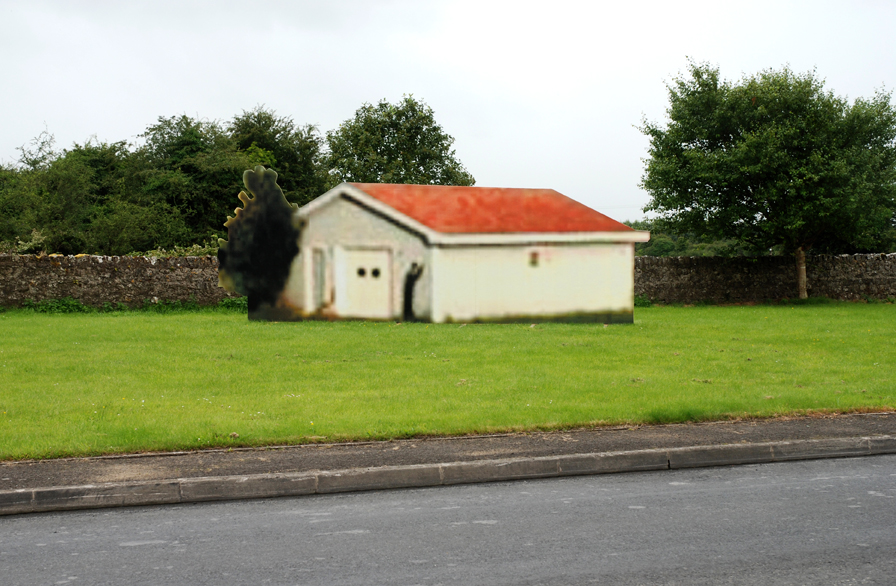 Until Askeaton has streetview 2009. Print on wallpaper, wood, 290x800 cm.Askeaton, Co. Limerick is one of the oldest towns in Ireland. In the 1840s, lots of Irish people immigrated to the US. A few people from Askeaton set up a new town in Wisconsin which they also named Askeaton. If you look for Askeaton on Google maps youšll find a streetview of Askeaton, Wisconsin, US. The first building you see is a barn. The original town of Askeaton in Ireland has not yet been photographed by Google and doesnšt have streetview yet. Išve constructed a copy of that specific barn in Askeaton US, and placed this facade or įpropš on the most resembling location along the main road in Askeaton Ireland. The idea is that if the Google Photocar will come by (it was recently seen in Limerick city), this image will be picked up, and the building will simultaneously exist in both Askeatons.
Realized in Askeaton as part of Welcome to the neighbourhood 2009, curated by Michele Horrigan