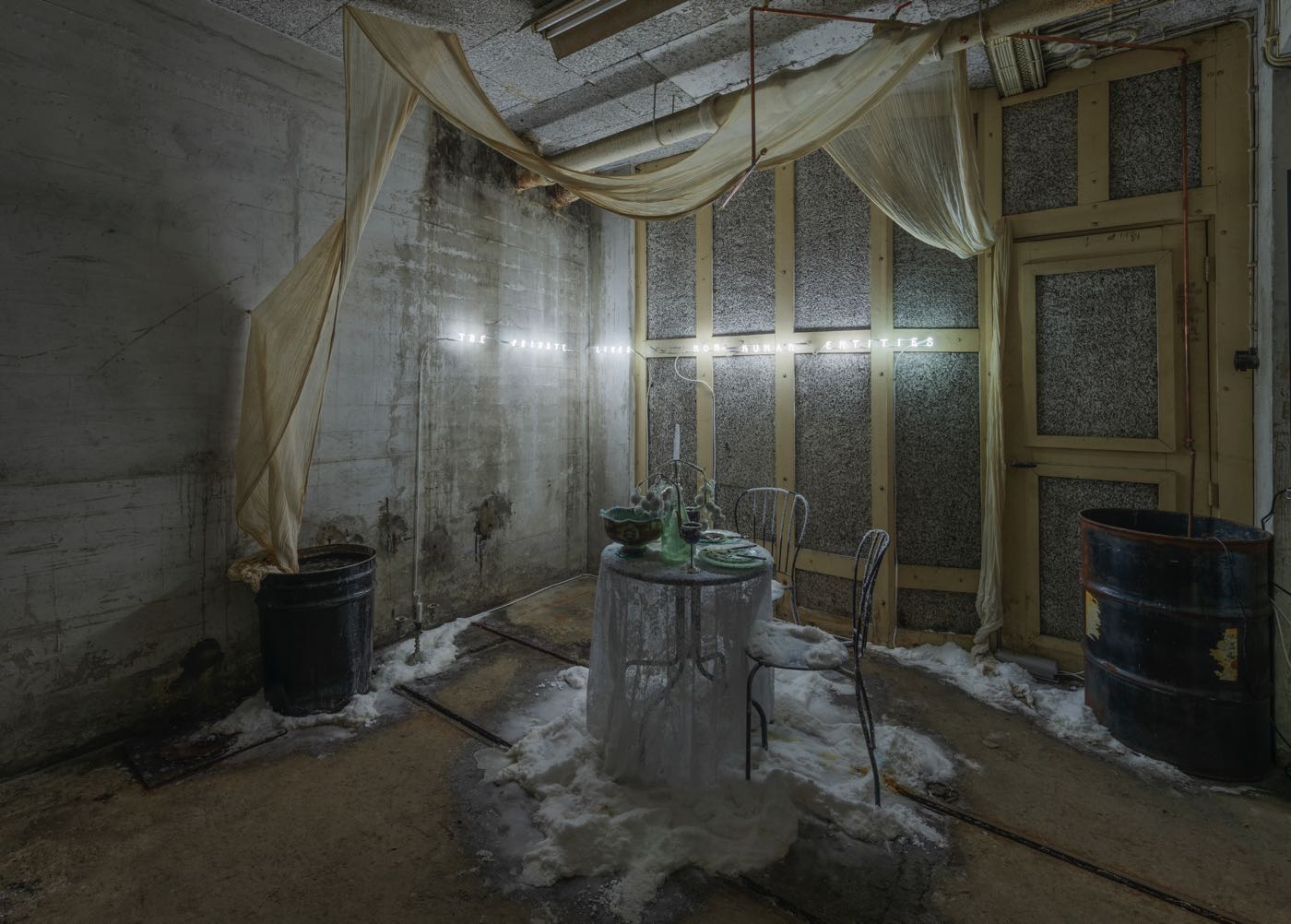 We have entered a collective state of uncertainty in recent weeks. In the aisles of the supermarket we apologize as we uncomfortably try to keep out of each other’s way, unsure whether we are overdoing it or not being careful enough. Is it still ok to visit one’s parents, and if so, should we wear a mask? We are constantly second guessing ourselves.

Questions also begin to nag us on a more existential level. The paradigm of economic growth is finally waning, but (fuck!) what does that mean for all the people who are now going to lose their jobs?
We say we need to start thinking about globalization, but before you know it, the efforts to curb the virus fuel the rise of new nationalism. It was always easy for us to express our opinion on Primark and fast fashion, but what do we, cosmopolitan artists, now think about our presentations abroad? Weren’t they "important for international exchange"? Or was that only an empty claim in a funding application? In the meantime our flight shame shifts into high gear. As with a cane for the blind, we are all moving by touch through an unknown landscape, whispering to each other about what we discover. The status quo is languorous. In short: we live in interesting times (provided you still have enough money to pay the rent and are not lying in the ICU with pneumonia). My blood, I notice, is pumping.

Now, I have a predilection for doubt. A hesitant person who thoughtfully tries to relate to her surroundings is a more interesting character (and a better friend) than a self-assured talk show guest.
But over the past decade such a person became the exception to the rule. She found it difficult to fit into the neoliberal mould. She didn’t go on social media, or when she did, she was indecisive about what she should or shouldn’t post. She was less resolute than she was supposed to be.

In the art field as well, the expression of doubt was replaced with resolve and pride. After the traumatic budget cuts in the arts and stirred up social cynicism, a landscape of ‘renewed self-confidence’, as the media put it, revealed itself.
Artists and curators became skilled in expressing, lauding and defending their right to exist. Blockbusters were promoted in superlatives, and tourists flocked in. Theatre makers began citing their five star reviews. The academies began to teach how to present oneself to the world through a good website. I paid someone to maintain my Instagram account. The modest auditorium behind the Stedelijk Museum became a shiny "bathtub" run by an art manager. The Amsterdam Stadsschouwburg (city theatre) became ITA and thereby just as cosmopolitan as its director. Posters were replaced by LED screens.
And as it happens with all spaces of splendour, the art world was also more carefully preened. There was less tolerance for contentious opinions and thorns in the flesh. The subversive and the attractive are difficult to reconcile anyway; in a glamorous world, a provocation can quickly become a gimmick.
Our moral thinking itself was buffed up. Institutions not only became (rightly) more inclusive, but began to congratulate themselves for it. They tumbled over each other in the expression of social virtue. I heard an authority in the art world proclaim that there was no room for artists who didn’t strive for good. This confused me; if ‘good conduct’ becomes a precondition, the senseless, the foolish, the dark disappears.

In the visual arts there was also another development: the speaking artist was born. Following the Anglo-Saxon tradition, the artist began to give keynote lectures. Occasionally she would speak out unequivocally about social issues and the position her work took in that regard. The jargon was impressive, the ideological position usually less surprising. I doubt if the lectures had any effect on the behaviour of the audience. Rather, the artist’s cleverness was reflected back on herself, as in an infinite palace of mirrors.

It seemed as if the landscape of the arts was now transforming into something between leisure industry and moral instruction, actually something quite similar to my Facebook timeline: entertainment, thumbs up and social positioning.

Our thinking was clear and beautiful.

Now we find it hard to stand still. Art institutions have closed their doors but they do their best on social media to remind us of their existence. (Follow us online! Share our event!) It feels forced and already outdated, a reminder of the pre-corona era when likeability and visibility still mattered. The internet these days mainly shows its powerlessness; so far I haven’t been able to attend a transcendental experience online. Yesterday I paid a virtual visit to the MoMA: it felt like a walk in the woods via Google Street View. Don’t bother. And if I consider the analogy a bit longer: the woods never suggested me to like them. If no people are there, it will patiently wait for them to return. This is how I imagine the art institution of the future, as a space that stoically and patiently waits for us. Let’s imagine that in the coming years only a small number of visitors will be allowed in those institutions, so few that the marketing department can be disbanded. We won’t cite reviews anymore, the LED screens will be removed. The public should be deterred rather than seduced, success becomes a problem. Tourists stay away in droves anyway, international art transport becomes unaffordable. If you are interested in a bonus, you won’t become a museum director. Damien Hirst is working at a food bank.

Let’s imagine it will take a while before we can adequately interpret this period. Let every socially critical artist, every trend watcher hold their breath. No TED-Talks.

And then, one day the Stedelijk opens a door, the one on Van Baerlestraat, between the "bathtub" and the old building. Not many people see it. I walk in. There’s paper on the floor. The escalator doesn’t work anymore. Here and there the lacquer has peeled off the wall. In one room I see a few works which, stammering and stuttering, don’t manage to express themselves properly. In a corner there is an unexceptional bucket. (It reminds me of the Verbeke Foundation in Kemzeke, Belgium, where you never knew whether you were looking at the art or at some tools someone left behind.) In the next room a work screams at me, not in sentences, but rather as someone with Tourette’s syndrome. Rather than inviting me to linger there, the work seems to want me to piss off. There is no apologetic text panel next to it.

Meanwhile in the Stadsschouwburg (formerly ITA) twelve people are scattered throughout the hall. For an hour now a feverish man has been lying on the stage grieving, as Artaud once described in The Theatre of Cruelty. It is unclear whether the man is ill, whether the disease is real. What the director wants to tell us is unclear, instinct wins over reason. After a while the man leaves the stage, he lacks the energy to receive flowers.

I suddenly recall an experience I had not so long ago at the HEM in Zaandam, at Maarten Spruyt’s exhibition in the former shooting gallery. Visitors were allowed in individually and very cautiously, like at the Albert Heijn these days. The collection of works offered a vague vision of a time after the Anthropocene. Nature appeared to have taken over. In retrospect: were those breathing objects viruses? With my (human) meaning-apparatus, I was unable to comprehend. I felt uncomfortable and happy. It turned out to be a prophetic exhibition.

As I am writing this, a cat walks through the apartment. She comes from our downstairs neighbors and has been meowing at the door regularly since we began our quarantine. Curiously she walks through the room, she doesn’t know this place yet. Cautiously she jumps onto this desk, to the right of my keyboard.

Let’s be that cat.

Dries Verhoeven (1976) is a theatre-maker and visual artist. He has recently published the monograph In Doubt. He is also a member of the Academy of Arts.

Art and crisis — Thinking about art in times of corona
The arts are taking a break. Theatres, museums, concert halls and galleries are closed. To a large extent, the art that is so desperately needed right now is inaccessible. Imagine being quarantined at home without films, without books, without music.
Though we may not access the art, we can still think about it. The enforced rupture of this isolation can also be an opportune moment to reflect on and from, the arts. Every Sunday for the coming weeks we will feature new writing on the arts under quarantine. Today we have the first offering from the initiators of this series: Akiem Helmling and Christiaan Weijts.