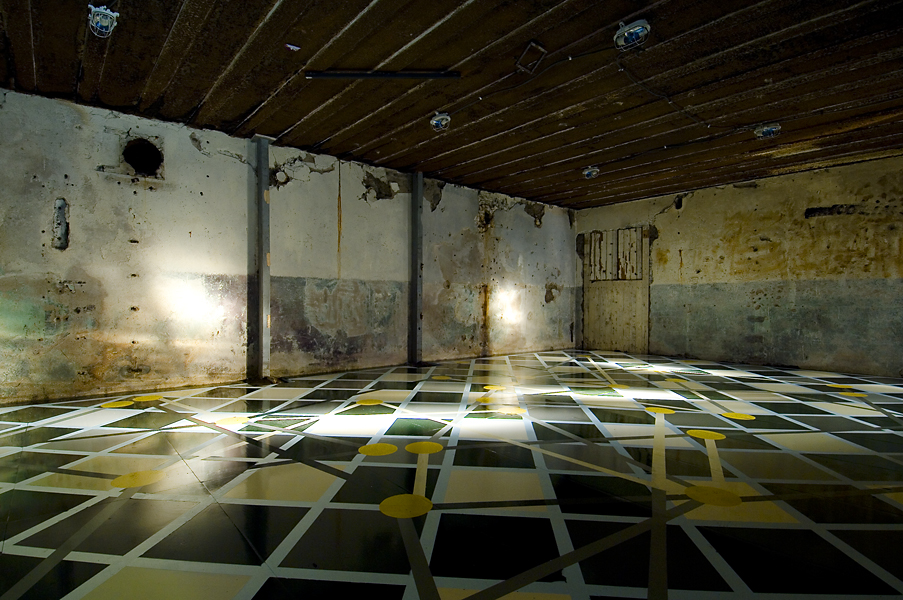 West, since 2007 located in the center of The Hague, is going underground this summer and occupiesis occupying the bunker in The Hague’s Westbroekpark with contemporary art. In a series of exhibitions featuring artists from The Netherlands and from abroad different approaches chosen by artists outside their familiar (white cube) environment will be presented at this new, exciting location. The bunker is an inhospitable atypical location for art - moist, dark and impenetrable - and forces the artists to create new work. On invitation by West they present themselves in five editions.

The bunker, with its explicit structural features, in the course of time changed its function. The building is now unwieldy and forms as a relic from World War II a part of Dutch (Park) landscape. In the case of the bunker in Westbroekpark the building was turned into an obscure storage and party location - and this summer becomes an experimental exhibition space.

For exhibition #02 Lotte Geeven adds a new layer to the historic location. Her installation “Pattern of Power” is inspired by a recent visit to the Parliament Palace in Bucharest, Romania. The motives and ornaments in marble, carpets and wallpaper, which proliferate in the interior of the more than 2,000 rooms of this palace, are designed separately for each room. As an extra layer, they veil the concrete carcass, the grim and threatening nature and the history of the building.
Geeven’s spaces usually tell a story, even if it’s not recognizable at first sight. During her journeys, she takes notes, reminders that she later uses to tell a story. She does so in a sketching manner and provides a lot of freedom for the viewer. By offering a subtle décor to the audience, she leaves the audience recording and associating. Development and growth of stories and images thus are important to Geeven. Especially for the Bunker she makesis making a floor of Styrofoam patterns based on the photo “All the many hours before dawn” that will be shown as well.

Lotte Geeven has previously exhibited in, amongst other places, Mart House Gallery in Amsterdam, PointB in New York, Local 1901 in Breda, GEM in The Hague, at the NADA Artfair in Miami, Art Amsterdam and Roma Artfair in Rome. In 2010 Geeven was awarded with the Illy Prize at Art Rotterdam.

By offering a free summer program at the Bunker, West wants to bring conceptual art to the audience, preferably in a public and easily accessible location. The busy Westbroekpark is a designated place for it. For more information about this project please visit www.west-denhaag.nl/bunker

The Bunker is located in the Westbroekpark between the Rose Garden and tearoom/boat rental Waterkant, in The Hague/Scheveningen and open daily from May 16 till September 16 2010 with free admission from 10:00 to 21:00.

We are pleased to invite you to the official opening of the second edition on Wednesday, June 9 at 19:00 at the Bunker in the Westbroekpark. Earlier thisthat day we will open the exhibition of Previeux Julien (FR) in the gallery in the city. You are welcome from 17:00 on at Groenwegje. At 18:30 we will leave by boat to Westbroekpark. The number of seats for the trip is limited.

For high res. photos or more information, please contact us at 070.3925359 or doris@west-denhaag.nl
Lotte Geeven is working on location in the Westbroekpark in week 23 and iswill be available for interviews.