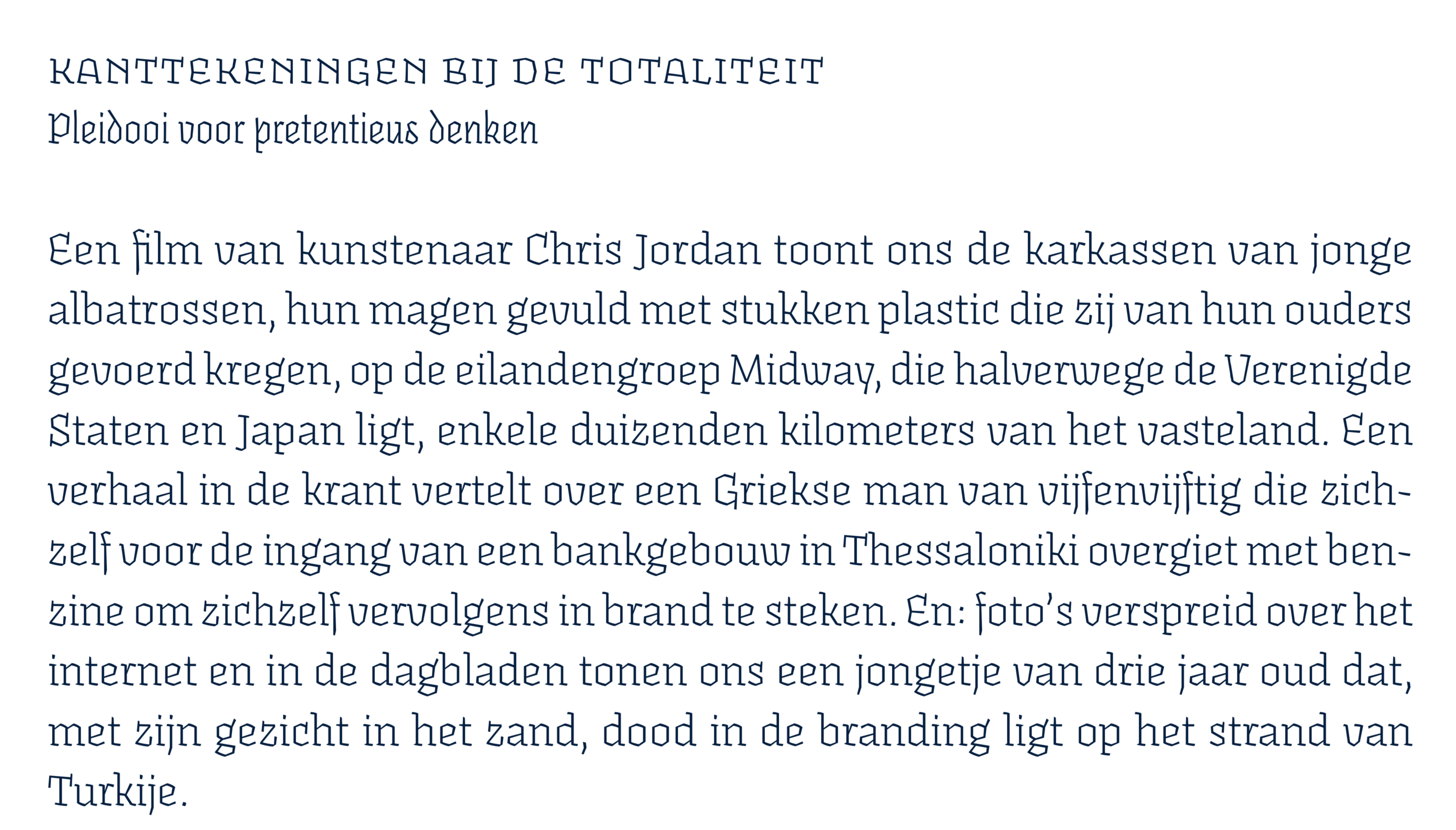 ‘We seem to be witnessing a collective catastrophilia: an insatiable longing for the end of days, in whatever form. What is noticeable in this is that nowadays, in the words of Fredric Jameson, we find it easier to imagine the end of the world than the end of capitalism.’

These times could easily be seen as the age of permanent catastrophe, with optimistic dreamers on the one hand and doom-mongering people on the other. The amount of ecological, economic, and humanitarian problems the earth and its inhabitants are dealing with are growing into an incomprehensible size. Interestingly, we seem to find greater fulfillment in blaming ourselves and each other for problems that seem incomprehensible to manage than daring to blame the bigger picture. As Thijs Lijster describes in his essay ‘Notes on Totality’ from 2016, this phenomena is more understandable when noting how the concept of ‘totality’ has become out of fashion since the second half of the 20th century. Totalitarian thinking has its flaws, due to its mono-lithic nature that does not account for the huge variety in cultural forms and social relations. In replacement, the network metaphor seemed more fittingly to describe contemporary society, where the hierarchy is flattened, boundaries are blurred and connections are any faster and wider. However, this ‘flat’ world is, in fact, only beneficial for a very limited amount of earth-inhabitants. For the rest, the monolithic ‘totality’ is more evident than ever, towering above them like a hopeless sign that their fate is immutable, thanks to the hegemony of Western capitalism that keeps the preservation of our way of life intact.

The ideology of the ‘participation society’ is strong and looking inwards to find solutions for the world’s problem is well-intended, but it can make us believe that these higher structural problems are the result of personal failure. Lijster explains that there has been a shift towards ‘short’ stories in which the critique of the system of capitalism has been pushed aside while ‘cultural’ capitalism sells us personalities and identities through consumptions.

Lijster suggest to start thinking bigger and therefore more critical - not by blaming ‘totality’ for every single problem but rather to understand that the above mentioned problems are not just excesses in an otherwise well-functioning society but that they are part of the way the system is structured — and has been from the very beginning. He proposes ‘tall stories’ — a more empathic solution than the ‘totalitarian’ grand narrative. It questions the obviousness and ‘naturalness’, and still remains changeable, acknowledging the constantly changing image of the ‘totality’. The tall stories can present a position that, not only will open up for the possibility of change of current structures but also for a different perception of the past. It is not a sin to use grand and pretentious words.