Dutch filmmaker Arianne Olthaar offers just the second film of her solo career, Dining Cars. It is a film of such technical and thematic tightness that it resembles the video documentation of a science experiment. Unlike the cold utilitarianism of science, however, it presents a certain degree of nostalgic romanticism. Still, despite this touch of warmth, the ride isn’t always a smooth one. 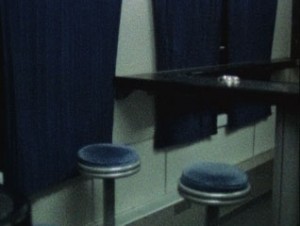 Enamoured with the transience of 1960s and 1970s design aesthetics, Olthaar has tracked down a number of especially outdated dining cars still servicing the railways of Eastern Europe. Mounting cameras in each, she has filmed a vast array of these empty cars as they bounce and sway along unknown rails to unknown destinations. And that is all the viewer is left to observe: empty cars, one after another in a long miserable march as if in a funeral procession. And with their garish hues of faded paint, wallpaper and wood panelling, they increasingly look the part of coffins chained together behind the same locomotive.

Their loneliness becomes almost too much to bear, at times, with the futile emptiness of passenger-less cars weighing heavily on the viewer. And as the film rolls along to its 15-minute conclusion, these interiors begin to look all the more sad, unnatural and alien. These spaces, after all, were designed for human patronage. They were built to shelter passengers speeding through the dark countryside of a cold winter’s night, to house the warm smiles, laughter and intimacy of a local pub on wheels. Instead, we’re left with the faded memories of bygone eras, sun-bleached and deteriorating, shaken loose by the incessant rattle from the rails.

There is, however, some life still remaining in these cars: the gentle dancing of window curtains, swaying doors, the rocking of light fixtures. These subtle hints become increasingly important with every minute a human figure is not shown. Finally, the warmth returns. We are not alone. And if we’ve made it this far, we could just as well be sharing a booth in one of the cars with Olthaar, sipping gimlets past knowing smiles.

Admittedly, Dining Cars was not as pleasing, inviting or attractive as most of the other Media City offerings. In fact, I had difficulty, at times, in remaining completely inside the piece. Though, films such as Dining Cars, in their tests of concentration and patience, are often much more rewarding than any “easier” film. With its flow of patiently timed cuts and never-ending soundtrack of railcar rattle, Dining Cars is our ticket to a warm nostalgic trance.
more texts
general text
2006 Roos van Put for Tubelight (NL)