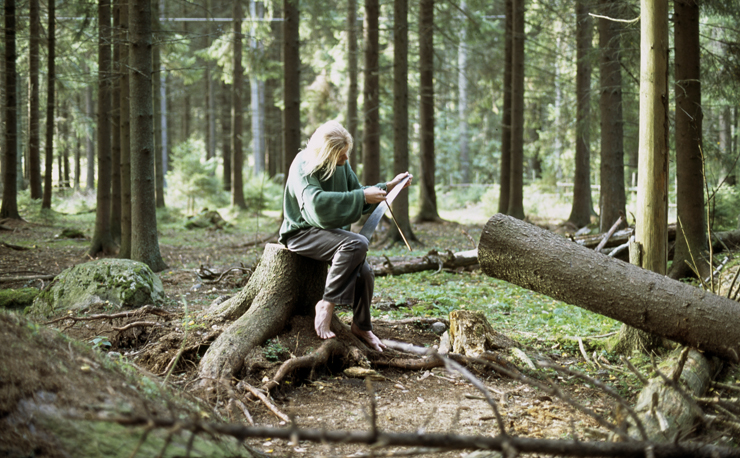 Contrapuntal, three channel projected installation, 16mm film and DVcam transferred to digital beta, stereo sound, 18:00 loop, 2005.
Contrapuntal consists of three films created in reaction to one another; Sawdust theme, Fluctuation theme and Kiwano's theme. The overall piece merges three different local musical expressions and locations. Between the surroundings of a man playing a saw in a forest and the urban world of a busker, there is a composed choral work, which acts as an interlude to the other two parts and is set in a construction site, a landscape in a state of flux. Each of the three parts is self-contained, yet through their juxtaposition the overall piece transfers the artistic expression of the individual into broader cultural layers and temporal perspectives.
Kiwano’s theme the first film made, is strongly documentarian by nature. To reflect the improvisational character of busker Juha Kiwano’s music. Reminiscent of city symphonies the film depicts a day in Kiwano’s life, his venture through the city of Helsinki and the meticulous rituals in the assemblage of his instruments; pots pans, and other makeshift instruments. The film focuses on an individuals attempts at gaining a place in the city, with Kiwano echoing the hectic pace and rythms inherent in a city with his music, as well attempting to gain contact with its inhabitants.
Fluctuation theme, the second film made. Was made in collaboration with composer Olli Koskelin and the Helsinki Chamber Choir. Koskelin composed the choral piece using the soundtrack for Kiwano’s theme as his base. The film was scripted entirely around the commissioned sountrack. Thematically the film encapsulates ideas of change, portrayed through its location, the choir and the musical composition itself. The film is set in the biggest construction site in Finland. The community, portrayed by the choir embarks on an aimless journey through the site, where subtle dynamics within the group are revealed. The film is the most allegorical of the three, condensating ideas inherent in all three films, adopting a grandiose cinematic vocabulary reminiscent of musicals. The landscape becomes majestic, like a blank canvas full of potential, only populated by the choir, and the machinery used to transform the landscape. Abstract elements take shape and become increasingly structured through the progression of the film. Change is taking place.
Sawdust theme, the last film made. Is situated in a national romantic forest setting familiar from Finnish folklore, in a highly romanticized and idealized past. The film is a hybrid in form. Amalgamating nature documentary, fable and narrative short film. The saw is an instrument familiar from old folktales and was used in Nordic countries to entertain the villagers. Sawpalyer Antti Halonen composed his music after the choir piece of Fluctuation theme. The film intertwines different temporal levels, by revealing the construction of a specific iconography.