DH: You might have been the first person I told about the Carry-on project. It came about last minute while we were up at Bard this summer. I would always see you holding your jar of tea, and I thought how you wouldn't be able to take the tea on an airplane because it was a liquid. I thought this could be an interesting place to depart in thought, whether or not this would actually influence the paintings. Can you tell me about the paintings that you did?

MF: I was trying to think of the ideas of water, travel, and passport. And it seems like the paintings came out with this circular middle form which I was interested in. I have been using the center of the canvas as a primary location, but it was a shield. I've been trying to break the shield for something more unexpected. You're right about me not being able to take tea on the plane. It's a totally harmless object. It wakes me up and makes me feel comfortable.

DH: What I would do is take the tea leaves on the plane, and make some nice green tea while in flight. Do you feel you were able to break this instinct in these paintings?

MF: Maybe in the one that you like (in the photograph, second from the left). It's in the process of happening. It doesn't really just happen all at once. It happens through time. Tea leaves on the plane would be fine except you would have to drink out of a styrofoam cup and your tea would taste like coffee.

DH: You would need to bring tea cups on the plane too. That is fine to take on, you can't just have liquid. You can bring an entire tea set, and then ask the stewardess for hot water. And if you are not allowed to bring the tea leaves into the country you are flying to, you consume it all in flight. So, when you were thinking of "water, travel, and passport," when you start the paintings, what does that actually mean? Is it more of something that is occupying your thoughts, as you are putting brush strokes on the canvas, and may inversely affect what you are doing physically? Or, are you visually thinking about those ideas, and trying to visually apply them to build from?

MF: I was trying to visually apply them to build recognizable forms. But then... as the painting happens, the trying to build something specific gives out, and the set of terms that I have been working with takes over. WHY? It is like a friendship, why are we friends? I have no idea except there is some draw that happens. I guess I believe in letting the subjective take course - not in a totaling way, there are limits. Its limits are the time between painting moves.

DH: Can you tell me about this set of terms and what you mean by moves?

MF: I make a move on the canvas then I leave the studio. I think about it or not, and I come back later. I know I'm on a good track in a painting when I can remember a good amount of detail in the painting. This means the painting has a clarity. The terms (forms, colors, etc.) are distilled through time within the paintings. They are not pre-sketched or pre-conceived. I have come to them through making and looking. They happen in the moment a decision is made.

DH: Do you feel the initial form, meaning here the "travel, water, passport;" collapses? Or, do you feel it grows into something new? Maybe this "growing" and "collapsing" are two words for the same process.

MF: I feel more related to collapsing then growing. I generally try to shut down growing. I guess you're correct though - in order to collapse, something must have grown to begin with.

DH: It just depends how you look at it. And in the end, regardless of what words you use, some kind of transformation takes place. What is interesting is to take this temporal process of creating the painting - and to take that into account when looking at it. Trying to both locate the point where the transformation culminates and ends (the state the painting is in), and also, to try to understand this temporal process in its production, the process that leads to this point of culmination (the process culminating in the state the painting is in). And this is possible, because when looking at a painting, one looks at it in time. You can spend time with it to try and unravel this compressed time of its becoming. But to go back to your connection with "collapsing," would you say that these paintings are a collapsing of the "travel, water, and passport"? Which would mean, they are still fragments of those thoughts? Or, do you see them as something new?

MF: Yes, they began with those thoughts. If in ten years I looked at the paintings, would I remember their beginnings? I'm not so sure. I mean they are from those ideas, but they have become something completely different. I'm not sure I would call them "new" either, because they are forms which I have been working with for awhile. 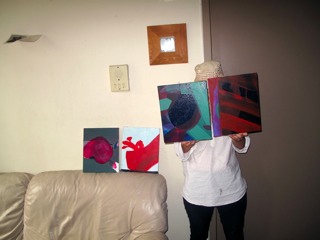