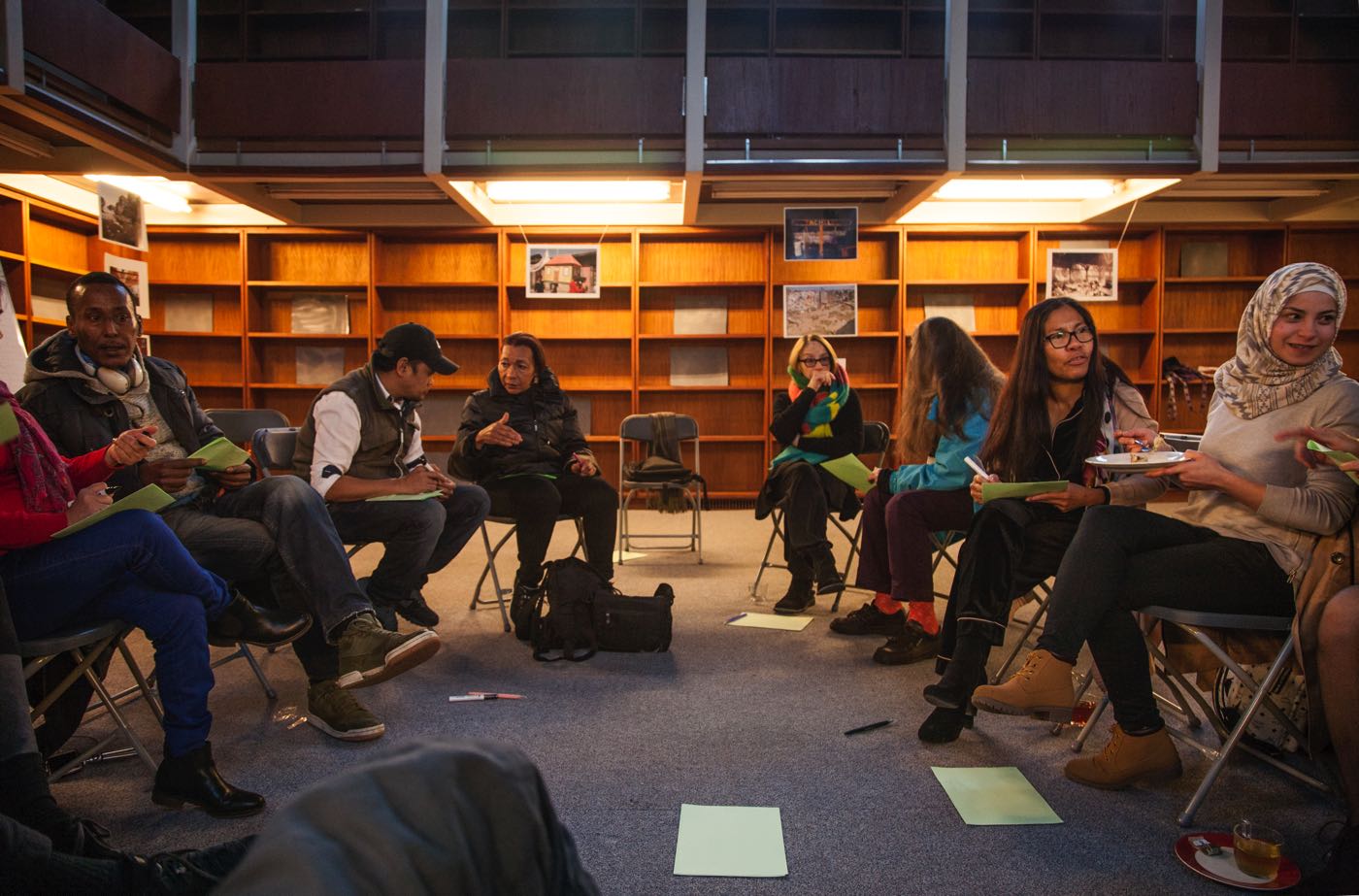 Can an embassy become a place of solidarity and exchange? West has invited architecture and design collective Assemble, winners of the 2015 Turner Prize, to develop a new project for the former US Embassy. Inverting the symbolism of this monumental historic building, which, until now, has always been closed off to the general public, Assemble have created a ‘space in progress’, that invites visitors to join in and become agents of its transformation. Assemble are a multidisciplinary collective, working at the intersection of architecture, design and art.

This collective was set up in 2010 when a group of 17 friends came together for the ‘Cineroleum’, a self-initiated building project that set up a temporary cinema in a derelict petrol station. After this initial experiment, the group continued to work together, and Assemble was formed. Since the start, they have taken a holistic approach to projects, working to set up businesses, develop materials, design buildings, or make furniture. In 2015 Assemble were the first collective to win the Turner Prize, for their ‘Granby Four Streets’ project in Liverpool. A collaboration with a group of local residents, ‘Granby Four Streets’ challenged the city’s approach to the ‘development’ of this area – which over the decades saw most residents removed and their houses demolished. ‘Granby Four Streets’ enabled a residents’ cooperative to rebuild housing and public spaces for the neighbourhood, and provided employment opportunities by setting up Granby Workshop.

With ‘Transnational Interstate Art Agency’ Assemble initiates a collaborative process for the transformation of the Embassy’s eastern wing that speaks back to Marcel Breuer’s building’s Bauhaus heritage. In its early days, the Bauhaus school made no distinction between artist and craftsman, or between student and teacher. Something of this ethos will pervade Assemble’s rooms within the embassy. The ‘Transnational Interstate Art Agency’ will become a crack in the normal life of the city, a place where people can come together, joining Assemble to make furniture from old fences, paint murals, print fabrics, cook and eat communal dinner. When the rooms are fitted out, a programme of activities generated by those who have come together to work here will begin, including exhibitions of craft and artwork, architectural research, communal feasts, socials and performances, and talks and shows about work of the small advocacy organisations who meet here. ‘TIAA’ welcomes and supports foreign energies, enthusiastic audiences, hands that want to get dirty, and minds that like to collaborate.

Assemble's oeuvre is as diverse as the interests and expertise of its seventeen members. At the end of 2018, they launched the Material Institute - an innovative fashion school in New Orleans for the Museum of Old and New Art. Recently, Assemble completed - together with Goldsmiths Centre for Contemporary Art for Goldsmiths University in London - their largest design commission to date. For this project, they took on the role of chief architect and remained actively involved in the material realisation of the project. They developed the facade cladding system, constructed pieces of furniture and architectural elements in their studio and produced light fixtures in the Granby Workshop.