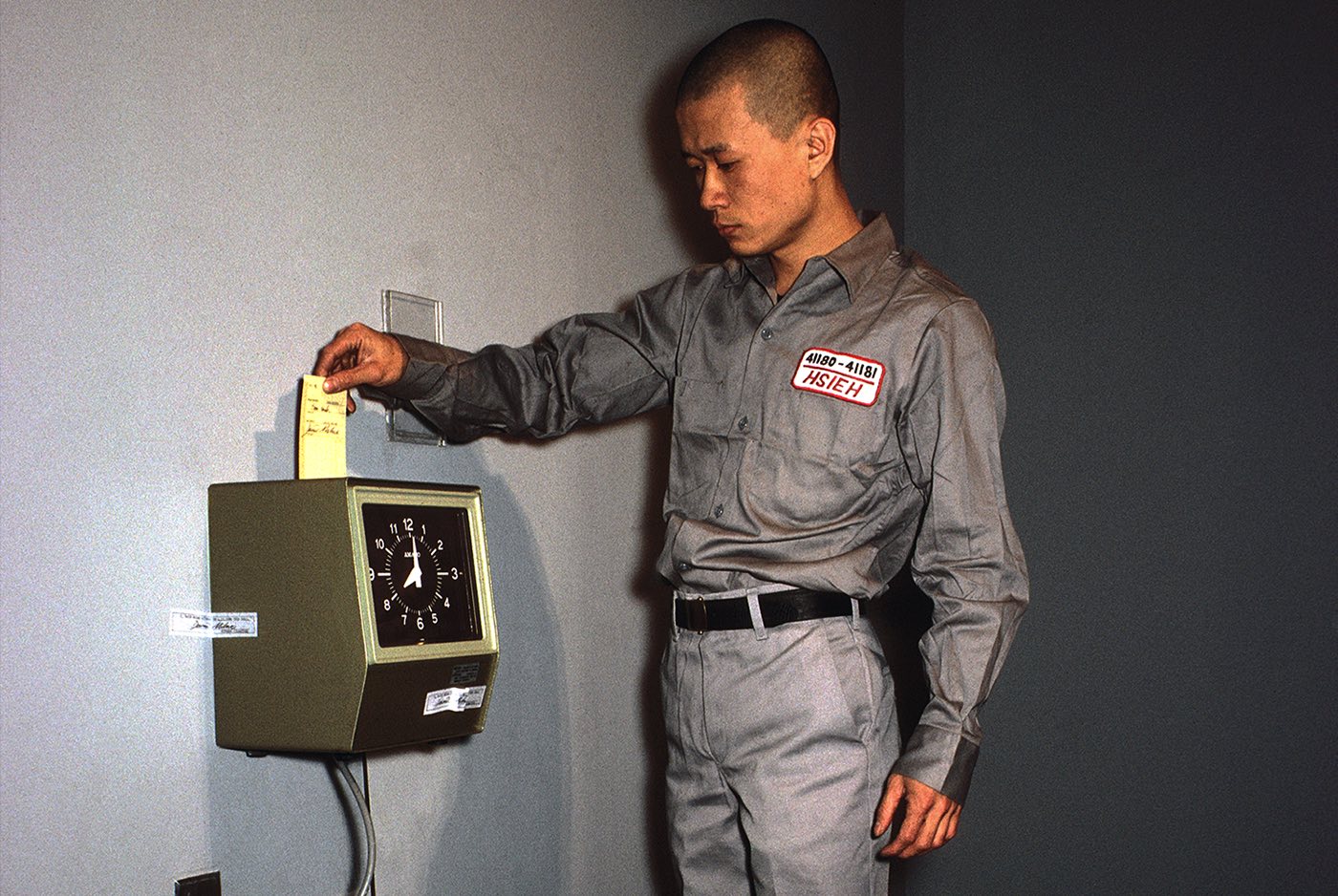 What is time? What is art? And how do we, human beings, relate to life? These are questions that occupy all of us, and weirdly enough we hardly ever dwell upon them. Performance artist Tehching Hsieh has devoted his life to the visualization of the intangible. For him, art is formed by life itself. ‘Art is not a career, not a profession, art is my life.’

For the world-famous Marina Abramović, the artist Tehching Hsieh is an example and ‘the master’. West is very proud to be able to present his work in the Netherlands for the first time. In a few offices on the ground floor of the former American embassy, his work will be exhibited continuously for a whole year. In April, Tehching Hsieh will come to The Hague for a personal lecture and some ‘Encounters’.

The solo exhibition ‘Time — Life’ presents two of Hsieh’s One Year Performances. The collected documents and artifacts together form two carefully composed installations. In ‘One Year Performance 1980-1981’, Hsieh submitted himself to the strict discipline of a time clock: during a whole year, as a labourer, he stamped a timecard in a time clock every hour. In ‘One Year Performance 1981-1982’, Hsieh lived on the streets for a whole year, without any shelter. Together, these presentations form an intense, compact exhibition about the human existence and the meaning of time. The work of Hsieh is impressive, whereas his way of living and working, in a certain way, is similar to the life and work of everyone. It is recognizable and strange. Simultaneously, he raises a question about the essence of art.

In 1974, Tehching Hsieh travelled from Taiwan to New York and for 14 years he lived in New York, illegally. In the late seventies and the eighties, he created his art far away from the art circuit, outside of galleries and museums. His performances took place in his own studio or on the street. In those days, only a small group of people within the art scene of New York was acquainted with this extreme form of performance art. After making a series of five impressive performance works, Hsieh revealed in 1986 that he would make art for the coming thirteen years, but that he would not display these art works to anyone. About this period of time, the artist relates that he simply ‘kept himself alive’. After finishing this ‘final’ radical work, from 1 January 2000 Hsieh decided to stop making any art.

In his work, Tehching Hsieh displays the difference and similarity between life and art. For him, life is about the passing of time. ‘Wasting time and free thinking’ is an issue that he examines with his art in a unique way. The observer is confronted with a story, which is both simple and strong, about the power of people. For many contemporary artists, Tehching Hsieh is something of a cult figure. The presentation in The Hague will be accompanied by an artist talk, during which Hsieh will provide the visitors with an explanation about his work and way of thinking. The ‘Encounters’ are intended for a selection of students and other interested parties; they form a unique possibility to have a personal conversation with Tehching Hsieh. For more information, visit our website.