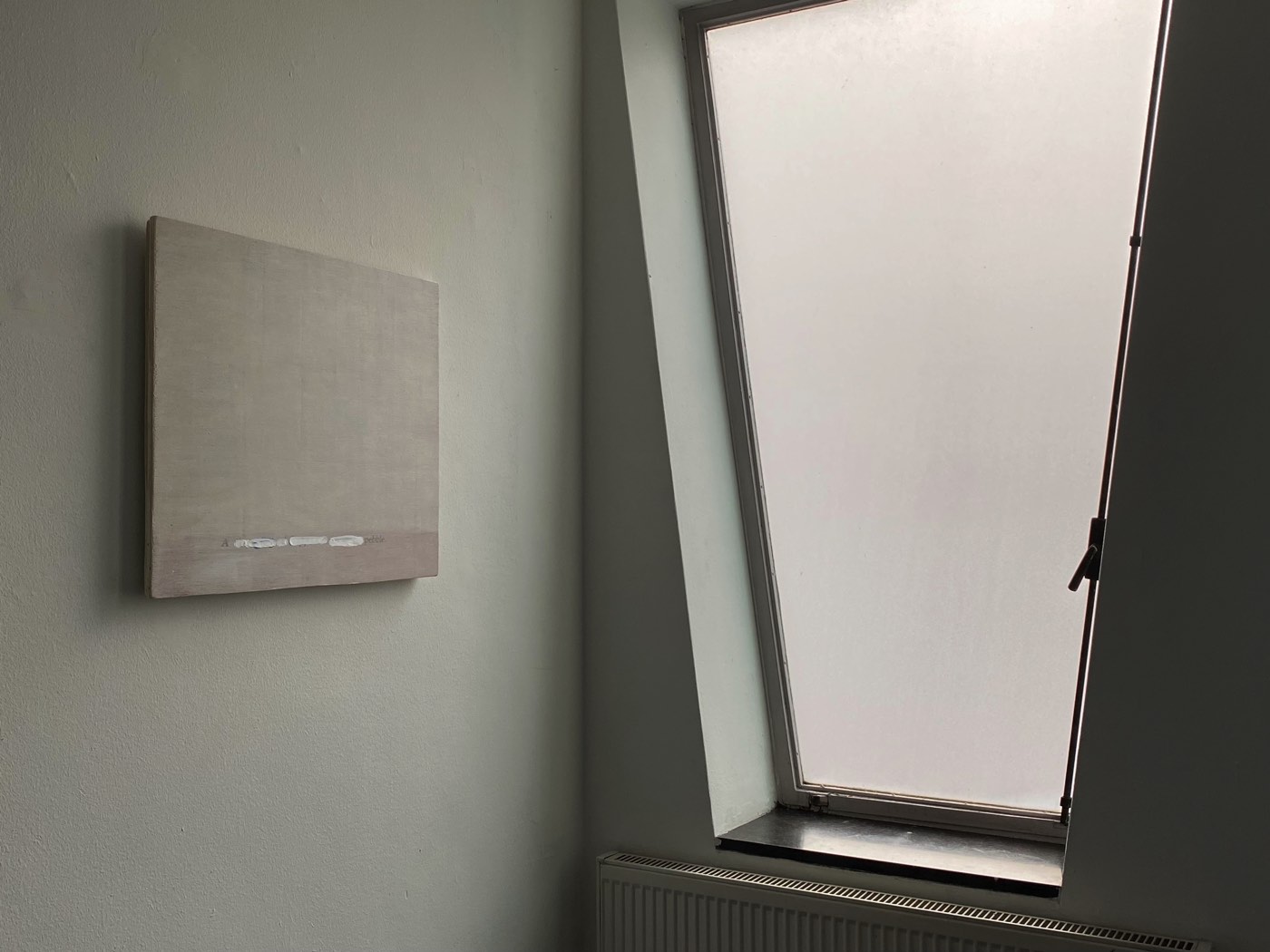 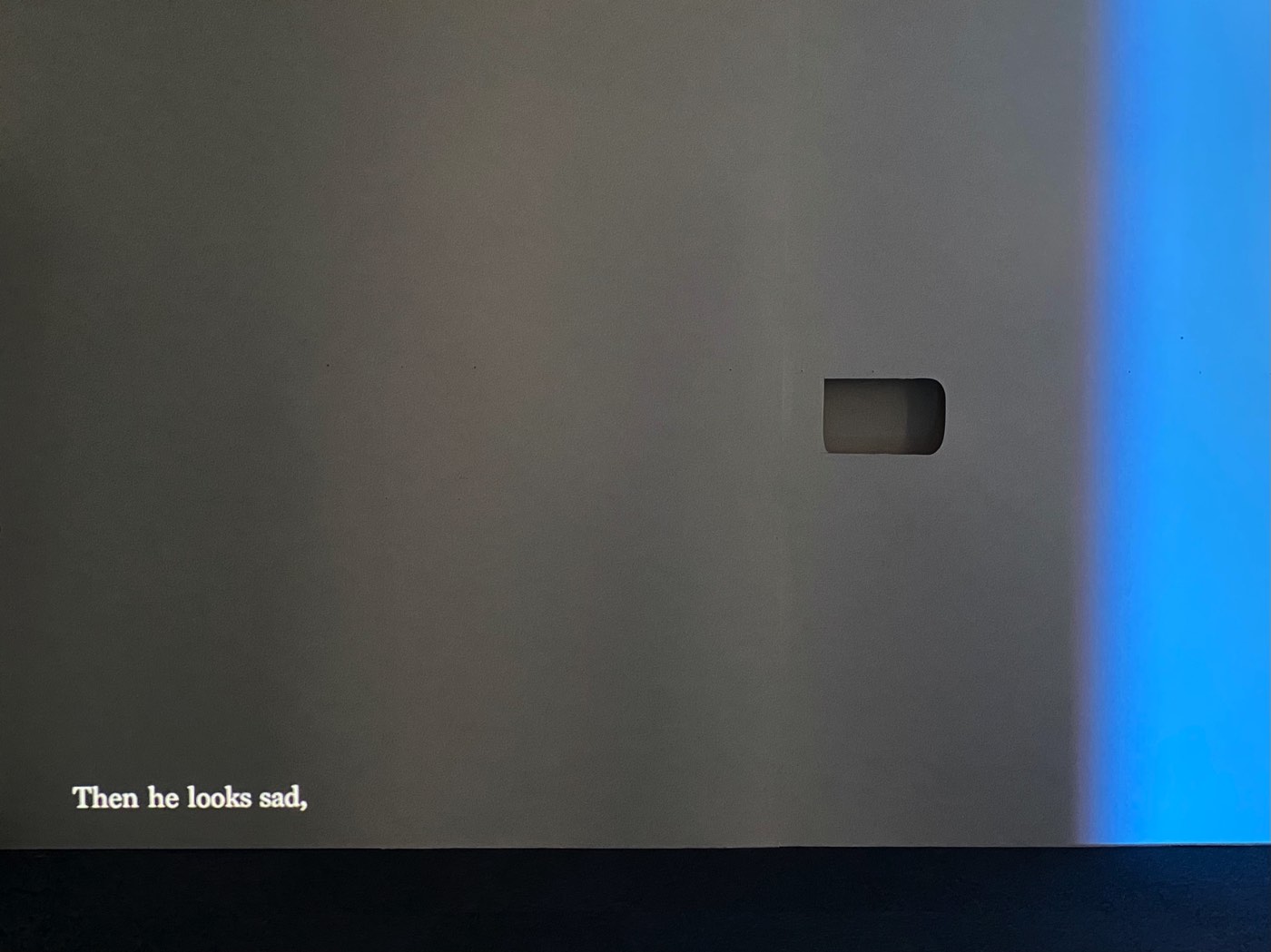 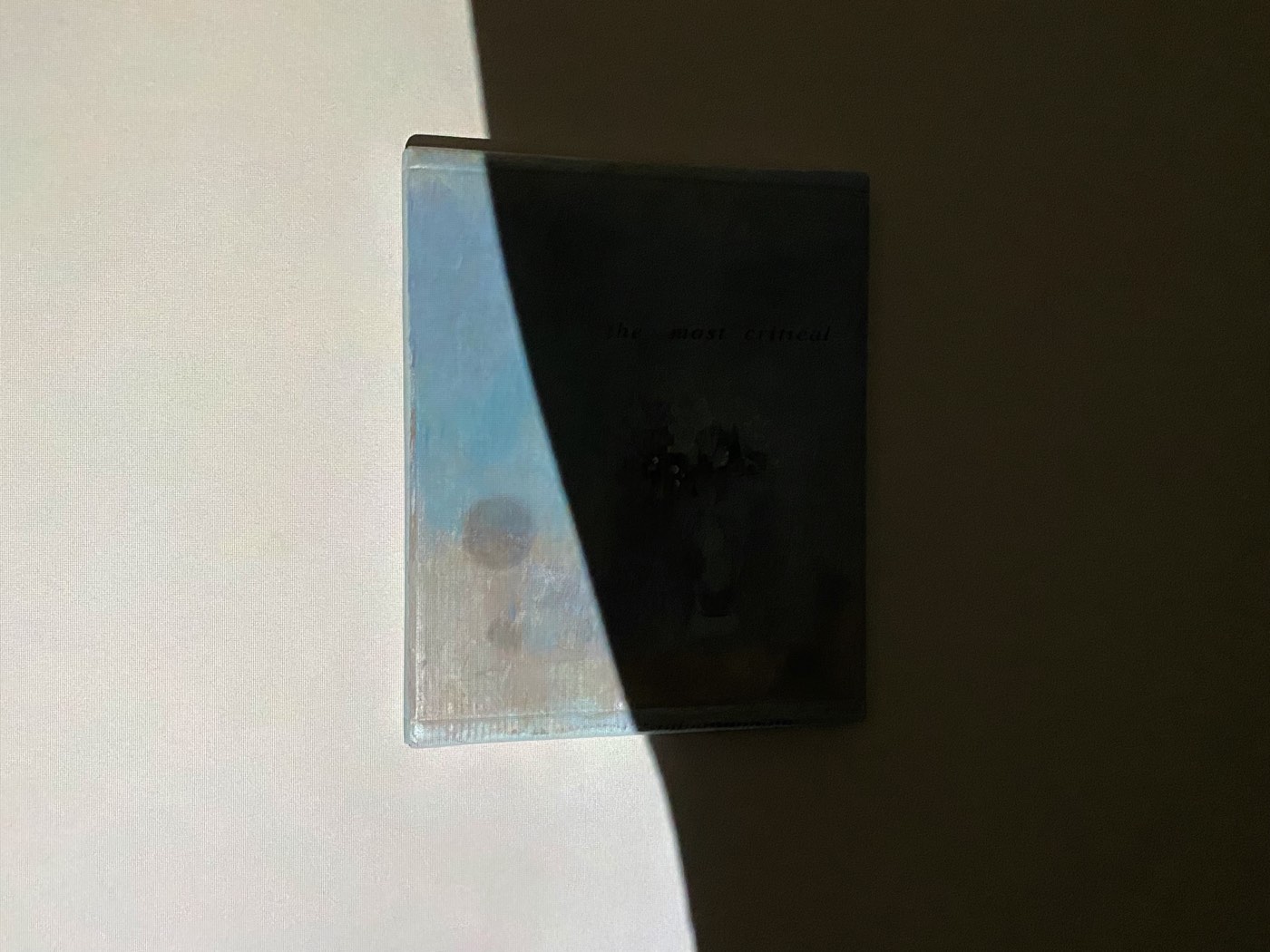 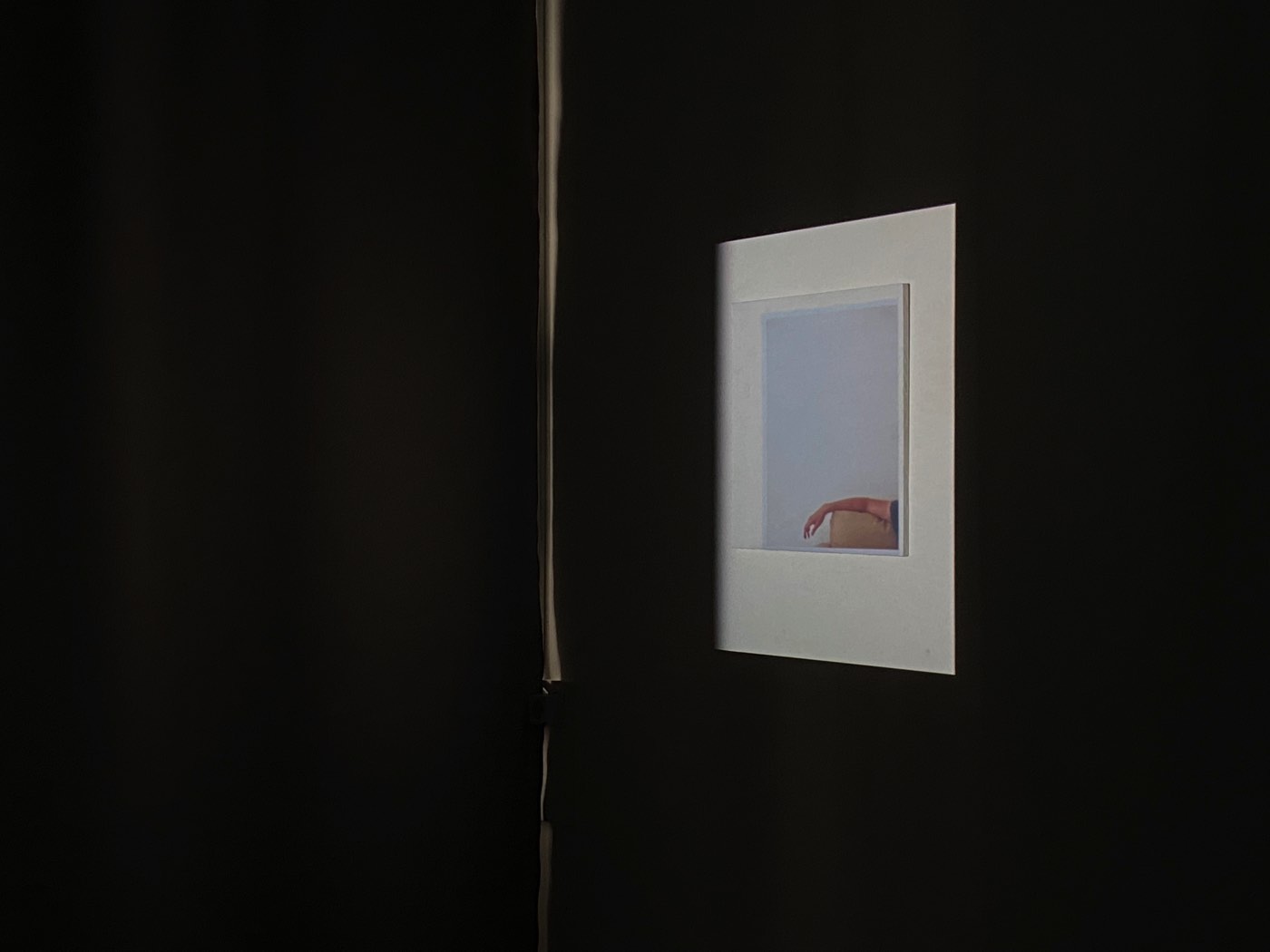 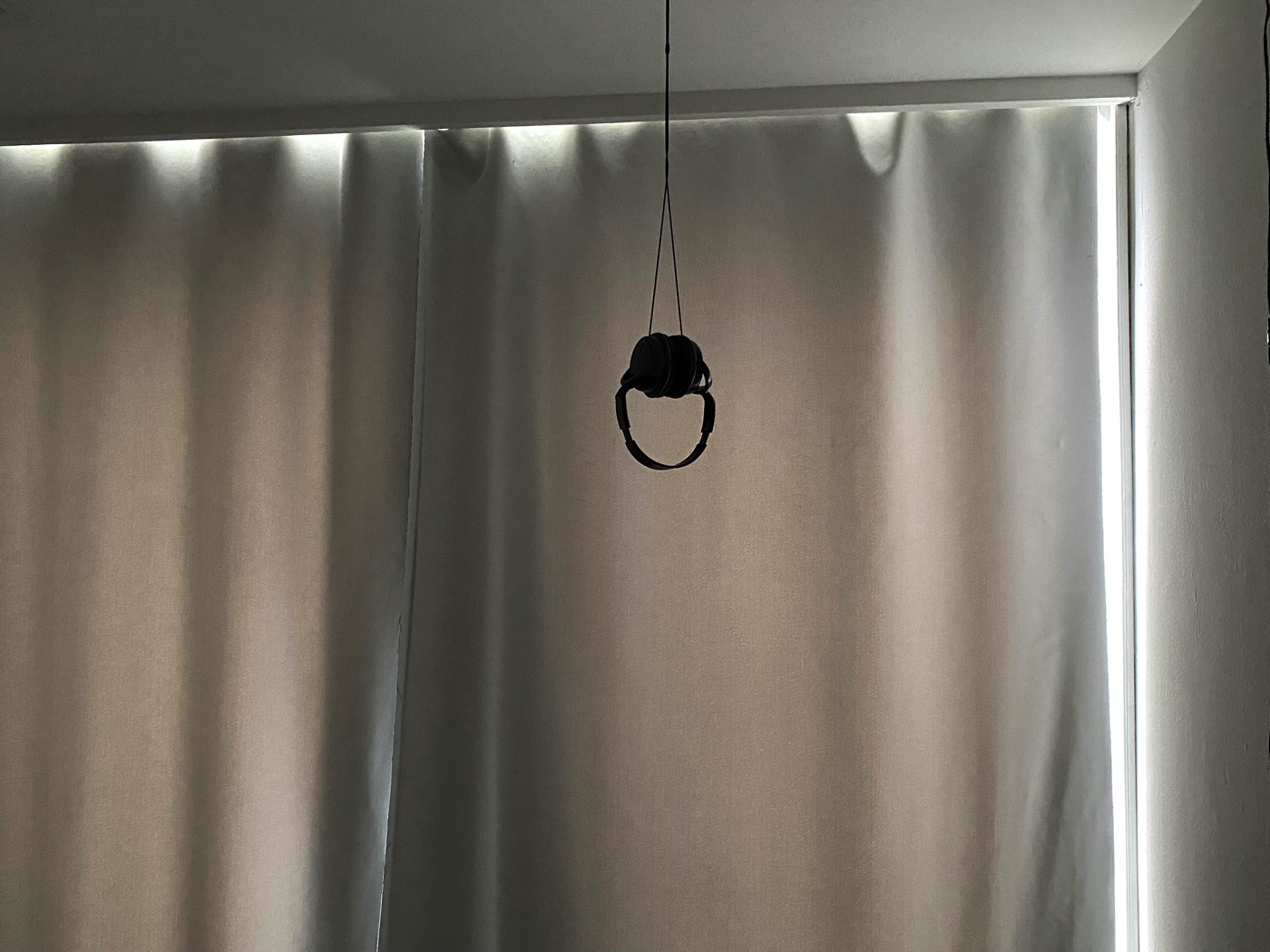 On September 4th, 2021, the first solo exhibition in the Netherlands of the Taiwan-based artist Lee Kit, ‘Lovers on the Beach’, was presented by West Den Haag. As a new lockdown was implemented in late December 2021, the exhibition had to close for visitors. While waiting for the restrictions to be loosened once again you can read a reflective piece on the exhibition written by the artist and West employee Rosa Zangenberg. Alongside the text, there are a couple of photographs of the exhibition in West taken by Rosa which visually supports her written thoughts.

I had never heard about the artist Lee Kit before the opening of his exhibition ‘Lovers on the Beach’, but from the beginning, I felt a distinct connection to his art. As I was led through the small rooms of the exhibition for the first time, these works, the small, seemingly sensible paintings and the dulcet sound pieces with their complementing soft scenarios of the video pieces, felt affirmative in a way I rarely experience. Lately, I am starting to recognize where my strong connection to his work is based on. I will not suggest that my work resembles his. We are from different schools and we have different topical interests. Even our intentions might differ. Rather, it has to do with his attitude towards painting, which is an attitude that I strive to achieve myself someday. Lee's painting method is not disturbingly loud, nor aggressive but, still, I find it relentlessly unorthodox. Unorthodox in the sense that it disrupts the core rules of how we treat a painting, not only in terms of the creation but also in the presentation.

Lee was trained in Hong Kong as a painter and, as he acknowledges himself, he cannot deny the fact that he still is a painter. For more than a century, Lee has challenged the nature of painting. The paint and the stretched canvas are no longer the preliminary conditions for a painting. Instead, these two components seem to be nothing but potential props in a larger constellation when Lee is preparing a work. His painterly eyes rather observe the entire space in which every aspect included has the potentiality to become part of a composition. The borders of the painting don’t stop at the edge of the canvas. Additionally, the light and textures in this composition are not limited to what a mixture of oil colors can produce. Lee finds natural and unnatural light and textures from several available sources in the composition, let it be a sheer curtain, plastic-wrapped walls, or a projector screening. If the sparkling pixels from the projector light produce the correct texture for the canvas, the canvas must be painted with projector lightning. Or, perhaps, nine pieces of A4 paper will be an excellent alternative to the canvas. It appears to me that ‘whatever’ is possible in a Lee composition. I recently heard the Italian artist Cesare Pietroiusti (see: 24-hour interview) talk about the concept of the ‘whatever’ in a way that made my opinion of the word turn upside down. Instead of connecting the word to the feeling of indifference, Pietroiusti advocates for the potential of the word to be filled with affection. Waiting to be infused with whatever context, the ‘whatever’ is something lovable that avoids distinction. The word makes the affectivity of anything possible, thereby defeating any predetermined conditions of whatever may be. I want to believe that the ‘whatever’ in this form is present in Lee’s art because he values the scratch in a table as highly as oil paint thoroughly carried out on a canvas.

Accordingly, Lee’s painting method is truly all-encompassing which I admire as a searching painter myself, but in order to fully express my unexpected affirmation for this artist, I need to return to his ‘real’ paintings. Because there are, as mentioned earlier, indeed painted canvases present in ’Lovers on the Beach’, several of them even. All of them are rather small. They are hanging on the walls around the exhibition somewhat solitarily, were it not for the projections and the occasional music. One of them is hanging casually in the long hallway, and another one is hanging in a room, being at once brightened and covered in the dim light of an abstract-looking video projection. It is impossible to take a close look at the details in the painting because your own shadow will cover the painting as soon as you come close to it. These are the parts I love the most about this exhibition. At the same time, I am hearing a comment that could be from my former art teachers repeating in my head: ‘But you are degrading your painting!’. My imaginary response to this question is not ready yet, as I am still searching, but I know that I want to justify the act of ‘degrading’ my painting somehow. The act of degrading is to make someone or something feel less worthy, hence, suggesting that some form of hierarchy is present. If this hierarchy is translated into a typical exhibition space, naturally, we would assume that the placement of a painting in a place where every parameter (the walls, the light, the surrounding space) supports the quality of the painting is of great importance. Conversely, a painting hanging in a dark corner, half obstructed by a flickering video projection, might be less important and, thus, of less value.

I acknowledge the need for a definition of how a painting ideally should be presented. Arguably, it helps to define the paintings’ quality and, preferably, enhances its features within its borders. Yet, it is becoming increasingly apparent to me how these predetermined (orthodox) definitions are restricting because it is harder to reach an acceptance of a painting that isn’t presented in this ideal way. I would argue that it limits the permission to reassume what a painting can do in space or, in other words, the creative freedom. To me, one of the painting’s core purposes is its strong, communicative aspect. Allowing the painting to converse with the space can expand the illusions and narratives outside the frame. The so-called degrading appearance becomes an additional layer and, possibly, even adds depth to the work while inviting the visitor to perceive the whole space as the work. To notice details, they would never have noticed otherwise. I believe this is exemplary of what Lee does. Not only is his all-encompassing painting method breaking the rules of the materiality of the painting, but it also effortlessly obstructs the highly mainstream way of presenting.

Surely, many still consider it rather careless to hang a painting in a dark room but in reality, this consideration is more careful than most of the presentations of paintings that I have seen. From the stretched canvas to the distant sound of Gnarls Barkley’s ‘Crazy’ playing in a pair of headphones, Lee Kit carefully makes ‘whatever’ lovable while convincingly demonstrating what painting as a method can do.