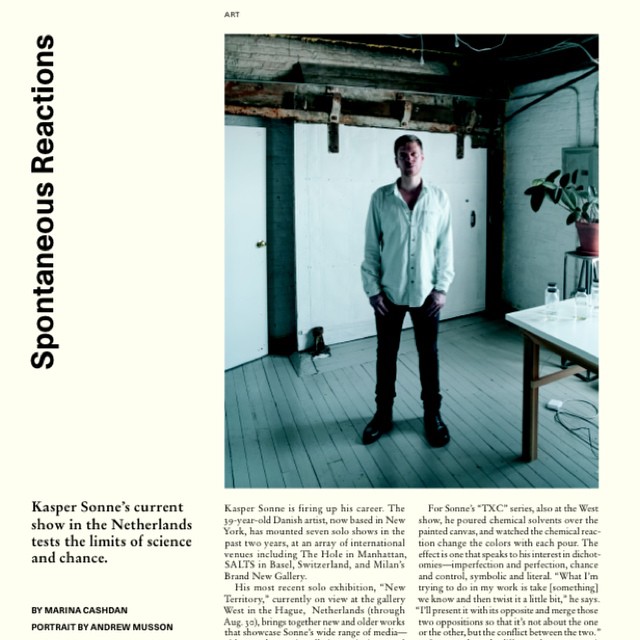 Kasper Sonne’s Intoxicating Paintings Take on New Territory at West Den Haag
Imagine you were given the task to create a perfect monochromatic painting. You take pains to apply impeccable, even layers of paint, avoiding the slightest blemish or any indication of the human hand. Then, you are instructed to set fire to it. This technique, an exhilarating dichotomy of creation and destruction, is central to Kasper Sonne’s practice, a complex discourse on the dichotomies that affect the way the world—and art—is viewed and perceived. The resulting visually compelling, vibrant artworks have catapulted the Danish artist onto an international stage, where his name is at the tip of collectors’ tongues, and included in shows from Palais de Tokyo, Paris to The Moving Museum, Dubai. Now, Sonne takes on The Hague, with a new show, “New Territory” at West. 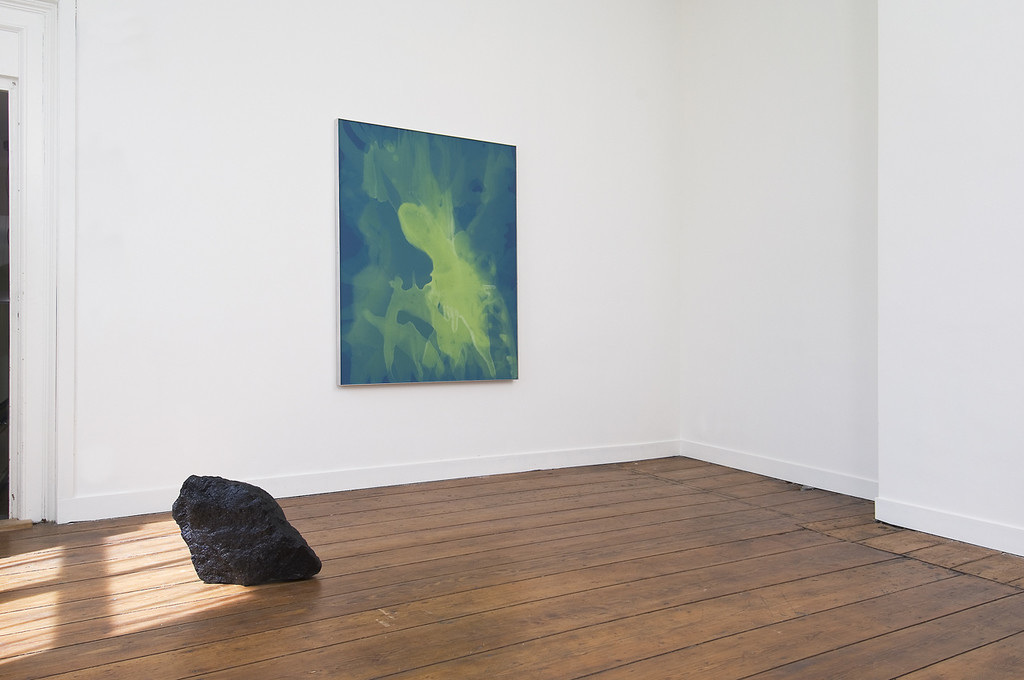 The tension between control and chance that is so strong in the burned paintings, known as Sonne’s “Borderline (New Territory)” series, carries into his “TXC” series, both of which comprise this exhibition, a mix of new and recent works. The “Borderline (New Territory)” works, which have inspired the show’s title, are narratives that transition from vibrant colors to singed edges to empty voids; a lack of control and improvisation is as much a part of these works as the artist’s actions and materials. A conceptually similar process is behind the “TXC” paintings, where a monochromatic canvas is disrupted by toxic chemicals. Rather than the physical deterioration of the canvas, in these works color plays the victim; though that is hardly the case, as the resulting works are spirited fluorescent abstractions that might be best described as intoxicating.

Aside from the tantalizing element of danger, both series are spectacular in the way that they attack notions of perfection. Begun as seamlessly executed paintings, then promptly defaced, these works embrace imperfection, and upend its significance in terms of art. Conceived through black and white terms, clear ideas, and methodical processes, Sonne’s works are finished with the viewer. A believer in the subjectivity of art, he leaves interpretations up to his audience, a brave decision, though ultimately beneficial in his case, where art strikes a balance, encapsulating both the purity of creation and the thrill of destruction.

Up and Coming: How Kasper Sonne is Setting the Art World on Fire
For an artist who titled his recent exhibition “Zero Emotional Content,” Kasper Sonne’s Greenpoint studio is surprisingly soulful. Located on the third floor of a former factory building now brimming with artist studios, windows overlooking a truck yard with Manhattan’s cityscape peeking out from behind, this is the location where Sonne’s “magic” occurs, as he quips upon arrival. Finished paintings hang on the wall, and works in progress are speckled throughout the studio—canvases with gaping holes burnt in them, large red rocks culled from Colorado. A pair of windows separate the main space from the artist’s office, which contains a bookshelf and a sparse desk that holds a few succulents, bottles of acid rain (his artwork Untitled (Acid Rain)), samples of volcanic rock, a Macbook, and a book of artist and activist Gustav Metzger’s writing and work. On this hot summer afternoon, light pours through the windows into the studio where Sonne’s tools are neatly tucked along a work table against the wall, and the station for his chemical paintings are methodically set up. 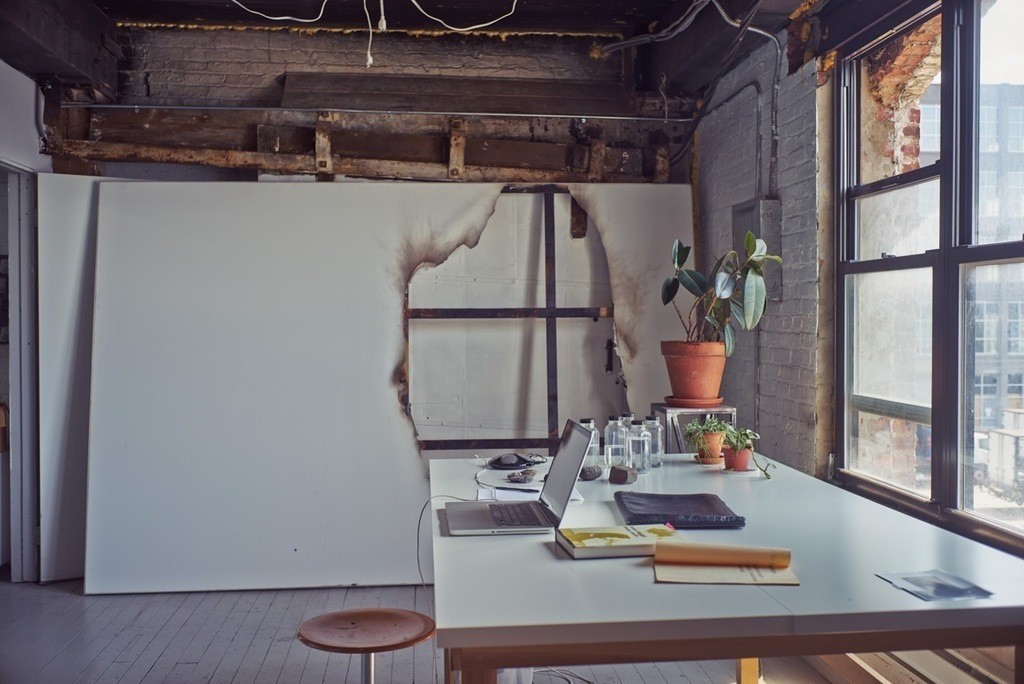 If you’re part of the art fair circuit or you’re on the pulse of the emerging artist scene, you likely know his name: the 39-year-old Dane had his breakout show at dealer Kathy Grayson’s gallery-meets-incubator The Hole in 2013, only his second solo show in New York. Since, the artist has mounted almost half a dozen more solo shows, including at Milan’s Brand New Gallery, Galerie Olivier Robert in Paris, and most recently at West gallery in the Netherlands (on view through August 30th); most of the shows have sold out before opening to the public. London-based art collector Simon Franks—who makes up one-half the of the Franks-Suss collection in London with friend and fellow collector Robert Suss—accredits this to Sonne’s authenticity as an artist. “It’s very important [for us] to understand their motives, their outlook; we ask ‘do they feel like a real artist?’,” explains Franks who counts two of Sonne’s two-dimensional works within a collection of nearly 1,000, which includes pieces by Rashid Johnson, Zeng Fanzhi, Diana Al-Hadid, Yang Fudong, and Lynette Yiadom-Boakye, amongst many others. It was a year ago that he and Suss caught wind of the artist through one of their curators. “We rarely buy art without knowing the artist personally, knowing their story. … There are a lot of talented artists out there but for someone to be a career-long artist, that takes someone quite special.”

There’s no doubt Sonne is on the path to being a career artist. His work beautifully, often cleverly, plays with the tension of dichotomies such as imperfection and perfection, chance and control, creation and destruction, empathy and apathy, rigidity and fluidity. “What I’m trying to do in my work is take things that we know and then I’ll twist it a little bit. I’ll do something to it, I’ll present it with its opposite, and I’ll merge those two oppositions into one image so that it’s not about the one or the other, but it’s actually the conflict between the two,” explains Sonne. “It’s that space between the these two certainties that I’m interested in, and letting the viewer define that meaning for themselves.” His materials are dictated by idea and experimentation, resulting in a breadth of medium that includes video, sculpture, installation, painting—frequently shown together, such as in his current show at West. For his series of burnt paintings, titled “Borderline (New Territory),” Sonne applies layers of house paint to thick canvas with a roller to create a smooth, monochrome surface devoid of any brushwork; he then takes the canvas outdoors and ignites it. “I do the opposite [of controlled], by setting it on fire and either letting it burn outside in the wind, or I’ll carry around the [flaming] canvas without me being in control of it” he says. The warm color palette and bubbled canvases of his newer burnt works evoke Yves Klein’s 1960s fire paintings. In Sonne’s series “TXC paintings,” also known as his chemical paintings, he pours toxic solvents over the painted canvas, watching the chemical reaction change the layers of blueish and purplish pigments on each pour. Sonne’s sculptures and video works create this same tension—porous rocks swathed in paint, testing its validity as a natural material; pristine glass jars filled with yellowish acid rain, forcing the viewer to reconsider the purity of raindrops; a chain-link curtain that divides a room as both an intimidating and inviting obstruction; and video works that play with language in ways that make it at once meaningful and meaningless.

With works on view throughout the United States—including in group shows at New York’s Sean Kelly Gallery and in Salt Lake City at the Utah Museum of Contemporary Art—and Europe, as well as forthcoming shows in East Hampton, Berlin, and Chicago, Sonne’s name will only continue to roll off the tongues of curators, collectors (fighting for one of his beautifully burnt paintings), and dealers (many who are vying for his representation). So if you haven’t heard of him yet, take note.