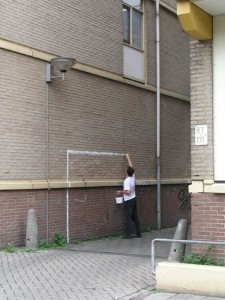 Harmen de Hoop can look back on a large array of exhibitions throughout the Netherlands, in England and in Germany in the last ten years. He has pursued his research and performances in Europe, South America and India. But Harmen de Hoop was never interested in creating art pieces for galleries, museums, or the art market. You will find his work in public spaces only. His audience are the people living nearby, or those who happen to bump into his public interventions.
For de Hoop, the artistic production of lasting creations is vanity. Taking a pragmatic view of himself as an artist, he sees himself as one of six billion inhabitants of this planet, where the impact of a single person is small and volatile. Harmen de Hoop is especially interested in the moment of irritation. He likes to set up impossible situations in public spaces. In his basketball paintings, he sets up unusable basketball courts on public parking lots which are really too small to accommodate a court. He paints unusable soccer goals on house walls, where there is no space for playing at all. In another performance of Harmen de Hoop, you see a little boy playing soccer on a tiny traffic island.
With such irritating interventions Harmen de Hoop makes the passersby aware of the limited, restricted and pre-coded space they are living in. His works might be food for thought, but if people are only slightly disturbed in their thinking and perception, Harmen de Hoop is already satisfied.
more texts
general text