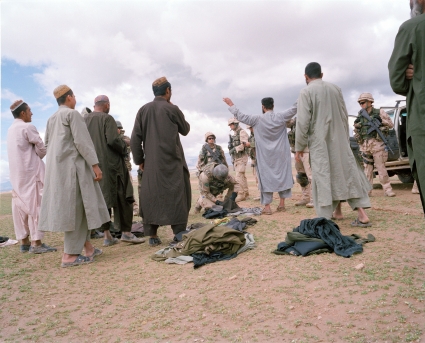 For a whole year, photographer Ad van Denderen lived and breathed the Dutch military. He photographed new recruits, the training they underwent and life on Dutch army bases. But he also took pictures of the army on its mission to Afghanistan and of those who stayed at home. Twenty years after the reunification of Germany, the Dutch military is constantly in the news and that made it a perfect subject for the twelfth edition of Document Nederland, the annual photographic commission awarded by the Rijksmuseum and NRC Handelsblad. The resulting pictures are on show from 7 November at the Hague Museum of Photography.

Van Denderen recorded not just the by now familiar picture of Dutch soldiers on patrol amid the dust clouds of Afghanistan and with their chums back in camp. He was there in the Netherlands too, when the new recruits – often mere adolescents – walked into army barracks for the first time in their lives. A motley crew to be found within a couple of hours marching in orderly fashion over the parade ground with a crisp ‘yes, sir!’. The photographer noted a change in the role of military personnel, especially in the case of ground forces. Whereas twenty years ago the army was still stationed in Germany, in combat readiness to repel a possibly imminent Soviet invasion, it is now more like an NGO doing its level best to get a country back on its feet.

Document Nederland is the annual documentary photo-commission awarded by the Rijksmuseum and Dutch daily newspaper NRC Handelsblad. It focuses on a different social phenomenon each year. The photographs can be seen not only on exhibition at the Hague Museum of Photography, but also in a special issue of NRC Weekblad, due out on 7 November. A still wider selection of Ad van Denderen’s pictures can be found in a book entitled Occupation Soldier, published by Paradox and NRC Boeken and scheduled for presentation at the exhibition opening on 6 November.