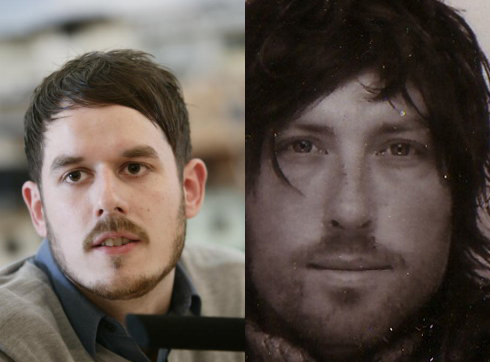 Kevin Muhlen (left) & Patrick Bernatchez (right)
In a conversation of about an hour, Muhlen will ask Bernatchez to explain the project Lost in Time. Subjects that will be discussed include: What is the ratio of the BW (the watch once in 1000 years 1x rotates) to other parts of the exhibition? What is the romance of Science Fiction? And practically speaking, how to realize a project like this, with exhibits and presentations on different continents?

Patrick Bernatchez (1972) is an multi-disciplinary artist whose work spans the media of painting, drawing, sound, installation, video, and photography. Since 2006 he has been working on a number of large-scale multi-media projects that incorporate industrial architecture as the place settings for explorations of metaphoric metamorphosis, the changing nature of industry and power and reflections on death, decay, and entropy.

Guillaume-Van Roberge (1974) is a musician and composer. He has produced music for various projects, ranging from theater to literature, while working as a bass player in various formations (Stagger, The Urbanauts). His academic career took him to literary studies, creative writing and screenwriting. He writes stories and composed music for contemporary art projects.