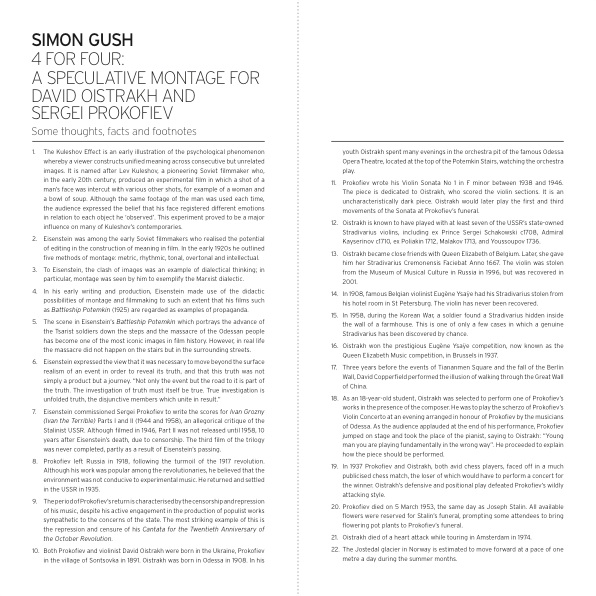 Some thoughts, facts and footnotes

1. The Kuleshov Effect is an early illustration of the psychological phenomenon whereby a viewer constructs unified meaning across consecutive but unrelated images. It is named after Lev Kuleshov, a pioneering Soviet filmmaker who, in the early 20th century, produced an experimental film in which a shot of a man’s face was intercut with various other shots, for example of a woman and a bowl of soup. Although the same footage of the man was used each time, the audience expressed the belief that his face registered different emotions in relation to each object he ‘observed’. This experiment proved to be a major influence on many of Kuleshov’s contemporaries.

2. Eisenstein was among the early Soviet filmmakers who realised the potential of editing in the construction of meaning in film. In the early 1920s he outlined five methods of montage: metric, rhythmic, tonal, overtonal and intellectual.

3. To Eisenstein, the clash of images was an example of dialectical thinking; in particular, montage was seen by him to exemplify the Marxist dialectic.

4. In his early writing and production, Eisenstein made use of the didactic possibilities of montage and filmmaking to such an extent that his films such as Battleship Potemkin (1925) are regarded as examples of propaganda.

5. The scene in Eisenstein’s Battleship Potemkin which portrays the advance of the Tsarist soldiers down the steps and the massacre of the Odessan people has become one of the most iconic images in film history. However, in real life the massacre did not happen on the stairs but in the surrounding streets.

6. Eisenstein expressed the view that it was necessary to move beyond the surface realism of an event in order to reveal its truth, and that this truth was not simply a product but a journey. “Not only the event but the road to it is part of the truth. The investigation of truth must itself be true. True investigation is unfolded truth, the disjunctive members which unite in result.”

7. Eisenstein commissioned Sergei Prokofiev to write the scores for Ivan Grozny (Ivan the Terrible) Parts I and II (1944 and 1958), an allegorical critique of the Stalinist USSR. Although filmed in 1946, Part II was not released until 1958, 10 years after Eisenstein’s death, due to censorship. The third film of the trilogy was never completed, partly as a result of Eisenstein’s passing.

8. Prokofiev left Russia in 1918, following the turmoil of the 1917 revolution. Although his work was popular among the revolutionaries, he believed that the environment was not conducive to experimental music. He returned and settled in the USSR in 1935.

9. The period of Prokofiev’s return is characterised by the censorship and repression of his music, despite his active engagement in the production of populist works sympathetic to the concerns of the state. The most striking example of this is the repression and censure of his Cantata for the Twentieth Anniversary of the October Revolution.

10. Both Prokofiev and violinist David Oistrakh were born in the Ukraine, Prokofiev in the village of Sontsovka in 1891. Oistrakh was born in Odessa in 1908. In his youth Oistrakh spent many evenings in the orchestra pit of the famous Odessa Opera Theatre, located at the top of the Potemkin Stairs, watching the orchestra play.

11. Prokofiev wrote his Violin Sonata No 1 in F minor between 1938 and 1946. The piece is dedicated to Oistrakh, who scored the violin sections. It is an uncharacteristically dark piece. Oistrakh would later play the first and third movements of the Sonata at Prokofiev’s funeral.

12. Oistrakh is known to have played with at least seven of the USSR’s state-owned Stradivarius violins, including ex Prince Sergei Schakowski c1708, Admiral Kayserinov c1710, ex Poliakin 1712, Malakov 1713, and Youssoupov 1736.

13. Oistrakh became close friends with Queen Elizabeth of Belgium. Later,she gave him her Stradivarius Cremonensis Faciebat Anno 1667. The violin was stolen from the Museum of Musical Culture in Russia in 1996, but was recovered in 2001.

14. In 1908,famous Belgian violinist Eugène Ysaÿe had his Stradivarius stolen from his hotel room in St Petersburg. The violin has never been recovered.

15. In 1958, during the Korean War, a soldier found a Stradivarius hidden inside the wall of a farmhouse. This is one of only a few cases in which a genuine Stradivarius has been discovered by chance.

17. Three years before the events of Tiananmen Square and the fall of the Berlin Wall, David Copperfield performed the illusion of walking through the Great Wall of China.

18. Asan18-year-oldstudent,Oistrakh was selected to perform one ofProkofiev’s works in the presence of the composer. He was to play the scherzo of Prokofiev’s Violin Concerto at an evening arranged in honour of Prokofiev by the musicians of Odessa. As the audience applauded at the end of his performance, Prokofiev jumped on stage and took the place of the pianist, saying to Oistrakh: “Young man you are playing fundamentally in the wrong way”. He proceeded to explain how the piece should be performed.

19. In 1937 Prokofiev and Oistrakh, both avid chess players, faced off in a much publicised chess match, the loser of which would have to perform a concert for the winner. Oistrakh’s defensive and positional play defeated Prokofiev’s wildly attacking style.

20. Prokofiev died on 5 March 1953, the same day as Joseph Stalin. All available flowers were reserved for Stalin’s funeral, prompting some attendees to bring flowering pot plants to Prokofiev’s funeral.

21. Oistrakh died of a heart attack while touring in Amsterdam in 1974.

22. The Jostedal glacier in Norway is estimated to move forward at a pace of one metre a day during the summer months.