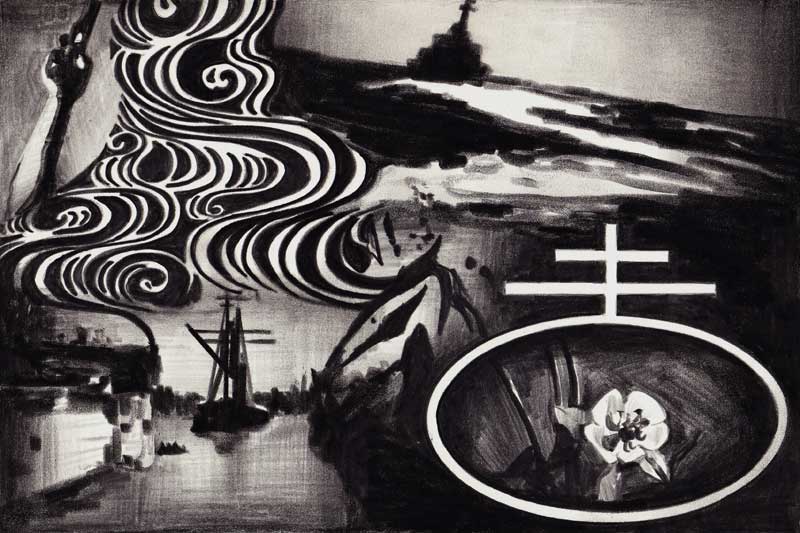 Gallery West, since 2007 located in the center of The Hague, has gone underground this summer and is occupying the bunker in The Hague’s Westbroekpark with contemporary art. In a series of exhibitions featuring artists from The Netherlands and from abroad, different approaches chosen by artists outside their familiar (white cube) environment will be presented at this new, exciting location. The bunker is an inhospitable atypical location for art - moist, dark and impenetrable - and forces the artists to create new work. On invitation by West they present themselves in five editions.

The bunker, with its explicit structural features, in the course of time changed its function. The building is now unwieldy and forms as a relic from World War II a part of Dutch (Park) landscape. In the case of the bunker in Westbroekpark the building was turned into an obscure storage and party location - and this summer becomes an experimental exhibition space.

Harold de Bree (NL, 1966) is cooperating with Marcel van Eeden for Bunker #05, the last edition of this season. De Bree is an artist from The Hague and quite experienced in the field of military. His architectural and military related objects frequently occur at the surface in the Netherlands and abroad. They often surprise the audience in public spaces where they seem to be placed totally out of context. Though these follies are very well thought-out and mostly refer to a certain moment or person in history. Making an art work for inside a bunker is that predictable, it’s almost redundant, De Bree argues. Nevertheless, he will present an installation that is thematically attached to the location but physically takes another direction. The main space of the Bunker will have an educational function. De Bree lives and works in The Hague. His work was exhibited at Glaspaleis, Heerlen, at Galerie Delta, Rotterdam, at Forumbox, Helsinki, at GEM, at Stroom and West in The Hague as well as on Manifesta 7, Bolzano and during Art Amsterdam, Art Rotterdam and The Road to Contemporary Art among others. Later this year, he will exhibit at Prometeo Gallery, Milan.

Marcel van Eeden (NL, 1965) is internationally well known for his black and white pencil drawings showing motives from the time before he was born which he systematically publishes on his Tekenlog. Based on old photographs and illustrations, they tell stories in the borderland of reality and fiction. Since the past few years, he has developed series featuring a special character and he has integrated text in his art works. Recently Van Eeden occasionally also uses colors which make his drawings appear more surrealistic. The Bunker is a building from a – in the means of the artist – ‘prehistorical’ period and, in combination with De Bree’s installation, fundament of a new work by Van Eeden. Van Eeden lives and works in Zurich and The Hague. He exhibits in national and international institutions, such as The Museum of Modern Art, New York, Stedelijk Museum, Amsterdam, Centraal Museum, Utrecht, Kunstverein, Hannover and Heidelberger Kunstverein, Bawag Foundation, Vienna, Bonniers Konsthall, Stockholm, Gallery Michael Zink, Berlin, Kasi Gallery, Istanbul, Gallery S.A.L.E.S., Rome, Gallery Maurits van der Laar, The Hague, Wetering Gallery, Amsterdam and many others. He is also frequently represented at international art fairs.

By offering a free summer program at the Bunker, West wants to bring conceptual art to the audience, preferably in a public and easily accessible location. The busy Westbroekpark is a designated place for it. For more information about this project please visit www.west-denhaag.nl/bunker.

The Bunker is located in the Westbroekpark between the Rose Garden and tearoom/boat rental Waterkant, in The Hague/Scheveningen and open daily from May 16 till September 18 2010, with free admission from 10:00 to 21:00.

We kindly invite you to the fifth and last opening of the sequence on Saturday, September 4 at 17:00. Following/Then from 19:30 on until late night we kindly welcome you at West on Groenewegje during the Museumnacht Den Haag to celebrate the start of the new exhibition season.

For high res. photos or more information, please contact us at 070.3925359 or info@west-denhaag.nl
Harold de Bree is working on location in the Westbroekpark in week 35 and will be available for interviews.